On what has become known as After, and now a slow motion, blurry unreal version of real life. An unrecognised, inexperienced, unwanted, hazy daze. I believe it’s called ‘shock’ or ‘trauma’. The first tremors of. The aftermath.

The house was heaving with grieving bodies –  the semblances of people who’d been kinda average just a handful of hours before. Now, all cast adrift, unanchored, alone in each others skins, either starring at or sharing in the heightened emotions of the others who came together in an uncommonly full Edwardian house in Sheffield.

Normality, the mundane had been cast out in an instant, and replaced by an unprecedented collective anguish. From the cigarette strewn back garden, the neighbours must have heard the wailing.

Clearly, I needed to get out of the house.

‘Shall I get anything? A few bits?’ Jim asked, as ever, and especially on Day 1, a rock.

‘I’ll come.’ I slo-mo replied, my words getting slower, as though my brain and my mouth weren’t talking to each other, so my words had to travel down a long lost underground tunnel to come out.  ‘No really, I want to come’.

The car passed slowly ( I assume we drove hearse like slowly) down Rustlings Road, round Hunters Bar roundabout, covering the posh Sheffield references in that Artic Monkeys song. We would take this same route again, a few weeks later, but sat in Mario the Mini, following two horse drawn carriages.  Now, we turned down Ecclesall Road.

I watched from Jim’s car. It was like watching some ambient scene in an art house movie, as the camera pans slowly.

People. People. There were people. People were walking about. People were going shopping. People were sat in Starbucks (Izzy works in a Starbucks. The thought was followed by a new stabbing, shooting pang of pain in my chest, so unfamiliar on Day 2). People crossed the road. People drove cars. They indicated, pulled out, slowed down. People were pressing the pedestrian crossing button, carrying their shopping home.

This was, to my amazement, everyday life and it was carrying on. But now, After, I was watching it from a distance, looking through my blurry, grief bubble lens, my mind camera on permanent slow motion. Muffled audio of everyday life tangled up with the new sensations of constant crying, aching chest pains and shortness of breath.

Waitrose car park. Safe from harm supermarket shopping, surely. We got out. We must have got out. I think I picked up a hand basket. In we went through familiar sliding doors.

To the left of the entrance, if you skip the fruit and veg isle, there is a low display stand for the papers. 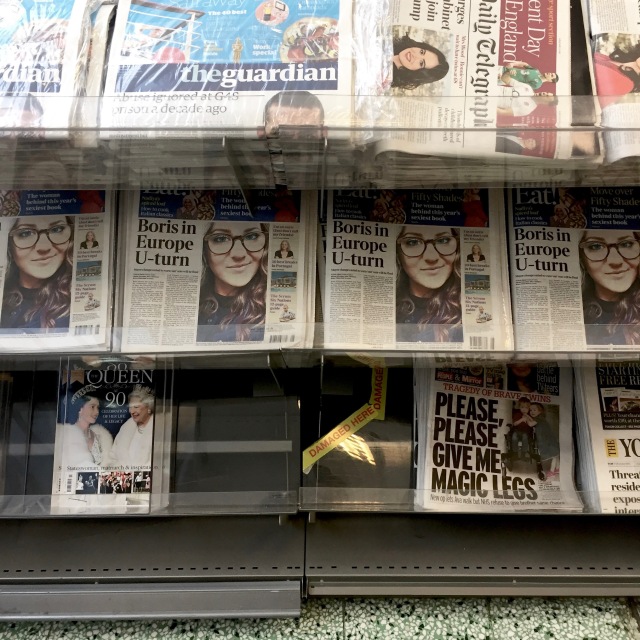 And there was Izzy.

Izzy, my Izzy. Spread out, a repeated wall of The Times, with Izzy on its cover. The selfie she’d taken on my phone the night of her A Level passing out prom – a ‘proud dad’ comment in a moment of sincerity in our usual comedy of faux love.

I must have managed to stay standing. (There can be no drama in Waitrose). I took a picture. You can’t see the tears, but I couldn’t really see if it was in focus.

We got milk, biscuits I think, more wine for later, I’m sure. We must have paid, we must have stood in a queue. I must have put a copy of The Times on the check-out conveyor belt. We must have left, because how else could we have got back home, to continue with Day 2 – to reporters camped outside in their cars, to the bodies of people in our house, to the constant stream and flowers and cards and family liaison officers.